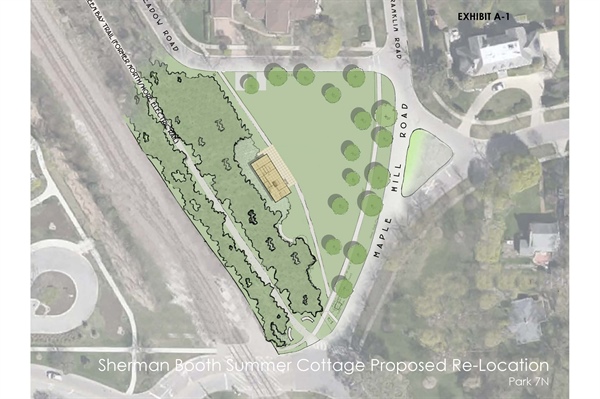 The Glencoe Park District continues to discuss Park 7n with residents both in favor and concerned about the move of the Booth Cottage.

Parking/Traffic Flow (during and after construction)

Parking around Park 7n appears to have been a pre-existing concern of the neighbors. They are concerned that moving Booth Cottage to the park site will exacerbate the issue. The Village heard that concern and is planning to install no parking signs on both sides of the street from the corner of Meadow and Franklin Roads through approximately 1005 Meadow Road. These signs will be installed this spring.

Construction traffic will enter the property off of Maple Hill Road ONLY.

In addition, the Village will do a traffic study for the Maple Hill Road/Franklin Road intersection to determine if further changes should be made. It is expected that this will take place this spring.

It was also noted that as part of the Connect Glencoe Trail project on Old Green Bay Road, the Green Bay Trail crossing at Maple Hill Road to the new trail will be improved based on feedback from the Active Transportation Plan.

There was concern regarding standing water in the park. The standing water near the house and the pathway will be addressed with several catch basins installed in that area.

The Park District will determine any need for additional plantings in the park after the project is complete. The direct neighbors to the park will be consulted when this determination is made.

There will be modest building-mounted lighting on the cottage for safety reasons, but GHS will make every effort to not make them intrusive to the neighbors. The lighting will not be motion-sensor activated.

Some residents questioned why Park 7n was chosen for the Cottage. The Board considered other parks as options for Booth Cottage, but agreed upon Park 7n because:

GHS is required to have $300,000 in escrow prior to moving the cottage to Park 7n. This will ensure that funds are available for the move and for exterior renovations. The escrow is in place to ensure that the cottage exterior is restored to a level presentable to the neighborhood.

GHS is only permitted to use the Cottage a maximum of 15 hours per week and only between the hours of 9:00am and 5:00pm.  However, GHS is a volunteer organization and anticipates the usage to be by appointment only and much less than 15 hours. They will be permitted to use the Cottage a maximum of six evenings per year until 10:00pm. The Park District will review these hours with GHS and any community member who would like to be included in the conversation, annually at a meeting open to the public.

GHS cannot use the Cottage as a rental space. If they would like to allow other local or GHS -related non-profits to use the space, written permission from the Park District Executive Director must be obtained. Those uses will be included in the 15 hours of permitted use per week and must abide by the approved operating hours which are 9:00am to 5:00pm with up to six evenings not to exceed 10:00pm.

Any use of the public space of Park 7n will have to go through the normal permitting process that any large gathering in a park/public space is required to do.

The Cottage will be moved once all the permitting is approved by the Village of Glencoe. GHS anticipates, weather permitting, they will begin work next week to prepare the Cottage for the move, at its current site, removing parts of the house that were not part of the original design. The approximate move is likely to take place near the end of March, once all plans have been approved by the Village.

The location of the Cottage will be “staked out” prior to the move so that the community can visualize where the cottage will go.

The fenced construction area will be limited to allow as much green space as possible for the community to use.

GHS estimates a four-month construction period, but this is subject to weather. The lease dictates that the exterior construction must be completed within one year.

The Glencoe Historical Society will provide information on their website throughout the entire process.  They are currently having technical difficulties updating their website. Until that is resolved, the Park District will provide updates on www.glencoeparkdistrict.com.