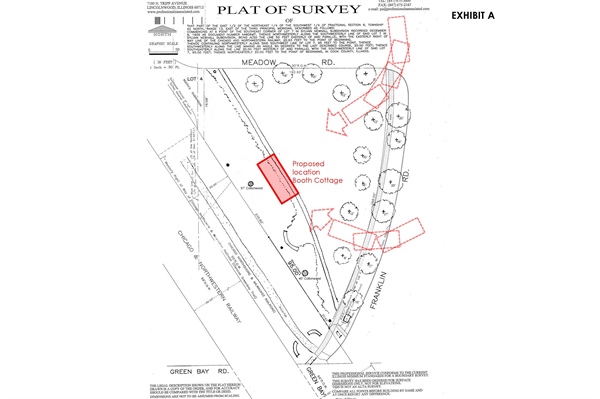 At the January 21 Board of Commissioners meeting, the Glencoe Park District and Glencoe Historical Society entered into an agreement to help preserve Frank Lloyd Wright’s Booth Cottage through a land lease of Park 7N (located at Maple Hill Road and Meadow Road). Since then, a number of questions have arisen. Here are the answers to some of the frequently asked questions.

The Glencoe Historical Society, Village and Park District also invite you to a meeting to further discuss the Booth Cottage project at 7:00 p.m. on Thursday, February 13, 2020 in the Community Room at the Takiff Center.

What is the current status of the Park 7N lease?

The lease for a small portion of Park 7N has been approved and signed by the Board.  The relocation of the Booth Cottage is set to proceed, but the Park District continues to work with the Glencoe Historical Society, the Village of Glencoe, and Park 7N neighbors to listen, explain, and understand issues surrounding the lease.

Why was the land lease decision made after only one community meeting?

The Glencoe Historical Society (GHS) would like to join the Park District and the Village in apologizing for the fact that the circumstances surrounding this project made it impossible to provide more notice before the public meeting and prohibited a longer community engagement process.  The overall timing of matters has been largely outside the control of GHS, the Park District or the Village.  It began when the new owners of the property at 239 Franklin filed a permit late last May to demolish the Frank Lloyd Wright-designed Booth Cottage, a Glencoe honorary historic landmark.  The initial plan was to move it to the GHS museum campus at 375 Park Avenue.  From June through mid- September, the parties did substantial work toward that goal.  Unfortunately, that plan proved unworkable and at the beginning of October, the parties were back to square one looking for a suitable location.

GHS and the Village then approached the Park District about the possibility of placing the Cottage on Park 7N.  This proposal made sense geographically, economically and historically.  Park 7N is at the foot of Ravine Bluffs, the only Wright-designed subdivision ever built.  The park sits only ½ block from the current location of the Cottage making a move both practically and economically more feasible.   The park was also originally owned by Sherman Booth, who donated the land after he became one of the Park District’s founding commissioners.  Placing the Cottage on this site both preserves and celebrates an important historic legacy of our community.

From mid-October 2019 until early January 2020, representatives of the Park District and the GHS worked tirelessly to negotiate the terms of an acceptable long-term lease that would permit GHS to move the Cottage to the park.  GHS was also working to raise sufficient private funding to support the move, restoration and ongoing operation and maintenance of the Cottage after relocation.  When the waiting period on the demolition permit expired on November 30, GHS worked with the owner to get a statement pledging to hold off on any demolition plans until January 30. Throughout the holidays, negotiations continued.  They were extensive and thorough.  Both the Park District and GHS, as stewards of the Glencoe community, were concerned about a wide variety of neighborhood issues, including, among many others, overall use, safety, parking, traffic and flooding.  During the process, it was by no means clear that the parties would be able to settle on acceptable terms.  As soon as there was a tentative agreement from both the GHS and Park District Boards, the neighbors and community were notified on January 10.  The public hearing was held on January 21 because action needed to be taken before the owners were able to demolish the structure.  We all agree that it is unfortunate that circumstances did not permit more communication and input.  Further delay would have jeopardized the survival of the Cottage. The comments that the neighbors made to the Board at the meeting were all items that the Board discussed in length when discussing the pros and cons of moving the cottage to this site and developing the lease agreement.  The Board did make changes in the lease prior to approving holding the GHS to a maximum of 15 hours of public use.

This decision required the board to take a broader view of what contributes to residents’ quality of life.  They felt preserving this asset within Glencoe in the Ravine Bluffs area is important to residents appreciative of the character of our village, historical preservation, architecture and culture. The board understands the neighbor’s concerns and will work with GHS to mitigate their concerns regarding parking, hours of operation and transparency every step of the way.

How was the public informed of the process?

The Park District apologizes for the rushed circumstances surrounding the lease of Park 7N; the timeliness of the issue made it impossible to provide more public notice of the Board meeting and prohibited a longer community engagement process.

The Glencoe Park District follows the Illinois Open Meetings Act, which requires Board meeting notices, agendas, and action items to be publicly posted a least 48 hours in advance of a meeting.  The Board agenda for the January 21 meeting was posted on January 17, more than 105 hours before the public meeting.

Why did the Board make this decision?

The Park Board has received communication and visits from residents that are both for and against moving the Booth Cottage to Park 7N. Both sides of the issue have communicated their support by circulating petitions and sending e-mails to the park district.

As elected representatives, the Park District Board of Commissioners are entrusted by constituents to make decisions that contribute to residents’ quality of life. The Board believes the decision to lease Park 7N for the preservation of a historical asset in the Ravine Bluffs area is important to the character of our village, historical preservation, architecture, and culture.

The Board understands the neighbor’s concerns and will work with the Glencoe Historical Society to mitigate concerns regarding parking, hours of operation, and transparency throughout the process.

How will this impact public use of Park 7N?

The Cottage would be placed on the western edge of the park replacing unsightly scrub vegetation and we believe substantially enriching the visual horizon.  The park is approximately 44,000 square feet and can easily accommodate the 1,100 square foot Cottage (less than 3% of the available space) without compromising land set aside for families and children to enjoy.

How will the Cottage be used?

Many of the issues that have been raised are based on a misunderstanding regarding the future use of the Cottage.  The primary goal of GHS is to save the historic structure, not to commercialize its use.  GHS does not have the manpower to make the Cottage into an active destination.  Initially, it will be available for research or meeting place only by appointment.  At most, the Cottage would have hours similar to those at the current GHS headquarters campus on Park Avenue.  It is open to the public only on Wednesdays from 10-3 p.m. and on Sundays from 1-4 p.m.  Over the past twenty years since they acquired that space, they have worked continuously to upgrade its appearance and use as a community resource.  The neighbors at that location will affirm the commitment of GHS to maintaining good relationships by promptly addressing any concerns that may arise.  GHS will maintain and operate the Cottage in the same fashion.  The lease was written in a way to gives flexibility to those days and times but it will not be used than 8-15 hours a week.  GHS cannot rent the space out for commercial purposes.

How will the Cottage impact traffic/parking?

We all agree that traffic and parking are of paramount concern.  Given the limited use, there should not be a substantial increase in either vehicle or foot traffic.  GHS will install an appropriate security system with camera coverage that allows for constant monitoring of the Cottage and immediate access to Public Safety in the event of any potential problem.  This security feature is one of the many ways that the Booth Cottage relocation will enhance the safety of the park and the neighborhood.

The Village is working with GHS and the Park District and to find solutions to any other potential parking congestion problems through new restrictions and increased enforcement.

What will be done to address the park's flooding?

The concern about water in the park is also of great importance to all of us.  At the public hearing, GHS introduced our civil engineer who is designing a solution to eliminate the problem.  This work will ensure a safer and more pleasant setting not only for the Booth Cottage but for all the neighbors and community users of the park.

How long will construction take?

Although the lease agreement between the Park District and GHS gives GHS one year to complete the relocation, exterior restoration of the Cottage and associated drainage issues, we anticipate that the work will be completed within a much shorter time frame.  Depending on weather conditions, which are unpredictable, we are looking at more of a four month “construction” time frame.

The Cottage may be moved to the site in three to four weeks.  Unfortunately, construction on the house cannot begin until the weather improves and a foundation can be poured.

We understand and acknowledge that construction will a hardship to the neighborhood for a short period of time.  The construction companies will be required to work with the same restrictions as you would when you renovate your home. There may deliveries that require street parking to drop supplies and then will be directed to park on Old Green Bay Road.  Any damage to the park land will be restored at the end of the project.  A temporary fence will secure the construction area, while still allowing some of the park to be used for recreational purposes

Will public funds be used for this project?

The Park District has leased the land to the Glencoe Historical Society.  No public funding will be used for this project.  GHS has raised private funds to relocate and restore the Booth Cottage. The Park District required proof of such funding as a condition of the Lease.  As a private not-for-profit, GHS will continue to operate and maintain the Cottage using grants and private funding. Any failure on the part of GHS to maintain its obligations under the Lease would result in the termination of the Agreement.

Anything else we should know?

Where do I get more information about the project?

We hope that this information helps to answer some of the questions that have been raised about this project.  We encourage you to continue to provide us with your concerns and feedback.  The Glencoe Historical Society, Village and Park District invite you to a meeting to further discuss the project at 7:00 p.m. on Thursday, February 13, 2020 in the Community Room at the Takiff Center.  Please email Glencoe Historical Society at [email protected] if you have specific questions that you would like them to address at the meeting.  You may also contact the park district at [email protected].